The anniversary of the consecration of the church of Sant Salvador de Polinyà and the inauguration of its remarkable wall paintings now 900 years ago are a good occasion to "celebrate" and love the local cultural heritage, which brings us closer and helps us understand the history of the diocese of Barcelona and our culture.

Polinyà’s Romanesque paintings were inaugurated by Bishop Oleguer on November 14, 1122

One of the most beautiful rooms in the Museu Diocesà de Barcelona is the refectory of the Casa de l’Almoina, where in the middle of the 15th century the canons of the Cathedral welcomed and gave lunch to 288 poor people every day. Currently, you can visit the exhibition “Bàrcino, Barchinona, Barcelona. A city, a bishop, a territory“, a journey through the Museum’s pieces through the history of the ancient diocese of Barcelona, from its origins in Roman times to the 14th century.

Presiding over this area, at one end of the room are the mural paintings of the parish church of Sant Salvador de Polinyà, which this November 14th celebrates the 900th anniversary of its consecration by Bishop Olegarius, and we want you to come celebrate with us.

Why were parishes and their churches so important?

The parish is a fundamental institution in the history of the Church and the culture of the people, especially from the 11th century onwards, which over time has shaped the territory and its people, as we know them today. The church was a place shared by its inhabitants and used for many different activities: they went to mass there, baptised their children, buried relatives there, it was a meeting place… and also a refuge in case of attack, since it was a sacred space.

The town of Polinyà was formed around the old church of Sant Salvador, which was consecrated by Bishop Oleguer 900 years ago (on November 14, 1122), although it is already documented from the middle of the XI century. Unfortunately, the original document of his consecration has not been preserved, but we do have a copy.

What do Polinyà’s paintings tell?

If you visit the exhibition, after discovering in which moment and context in the history of the Diocese of Barcelona the Romanesque style appears, you will be able to identify its main characteristics, which achieved great quality and popularity in our country, especially at the end of the century XI and first half of the XII. The main purpose of this style was to convey –like a silent preaching– Christian beliefs and norms of conduct to people who for the most part could not read or write. Therefore, different elements are repeated until they end up defining the main characteristics of the Romanesque: symbols, geometrization of the shapes and anti-naturalism in the figures, the most important being the didactic function over aesthetics and realism.

Regarding the iconography and the characters, although some parts are missing, what remains allows us to deduce that it narrates Jesus’ life, from birth to his passion and death. In the apse today we see the representation of the Virgin Mary (Maiestas Mariae) presiding over the upper part, and in the lower part we can identify five biblical scenes with their protagonists: the Annunciation (Virgin Mary and Archangel Gabriel), the Visitation (Mary and Elizabeth embraced alongside Joseph and Zacharias), the Nativity (in the upper part the Virgin and Child Jesus reclining and Joseph in the background, ox and donkey), Child Jesus’ lavatory (in the lower part Child Jesus in the bucket, bathed by two characters), and the Announcement to the shepherds (only the figure of the Angel remains in the upper part, and a goat and two sheep grazing in the middle of the vegetation). On the sidewall, you can see some scenes from the Apocalypse of Saint John (the coming of the end of the world and the final judgment) and Jesus before Pontius Pilate.

The little ones can play to discover the scenes and characters from the Bible that appear in the paintings, focusing on their symbols and attributes, while the older ones also delve into medieval society and the symbolic universe of the Romanesque.. Download the material here and prepare your visit! POLINYÀ 900 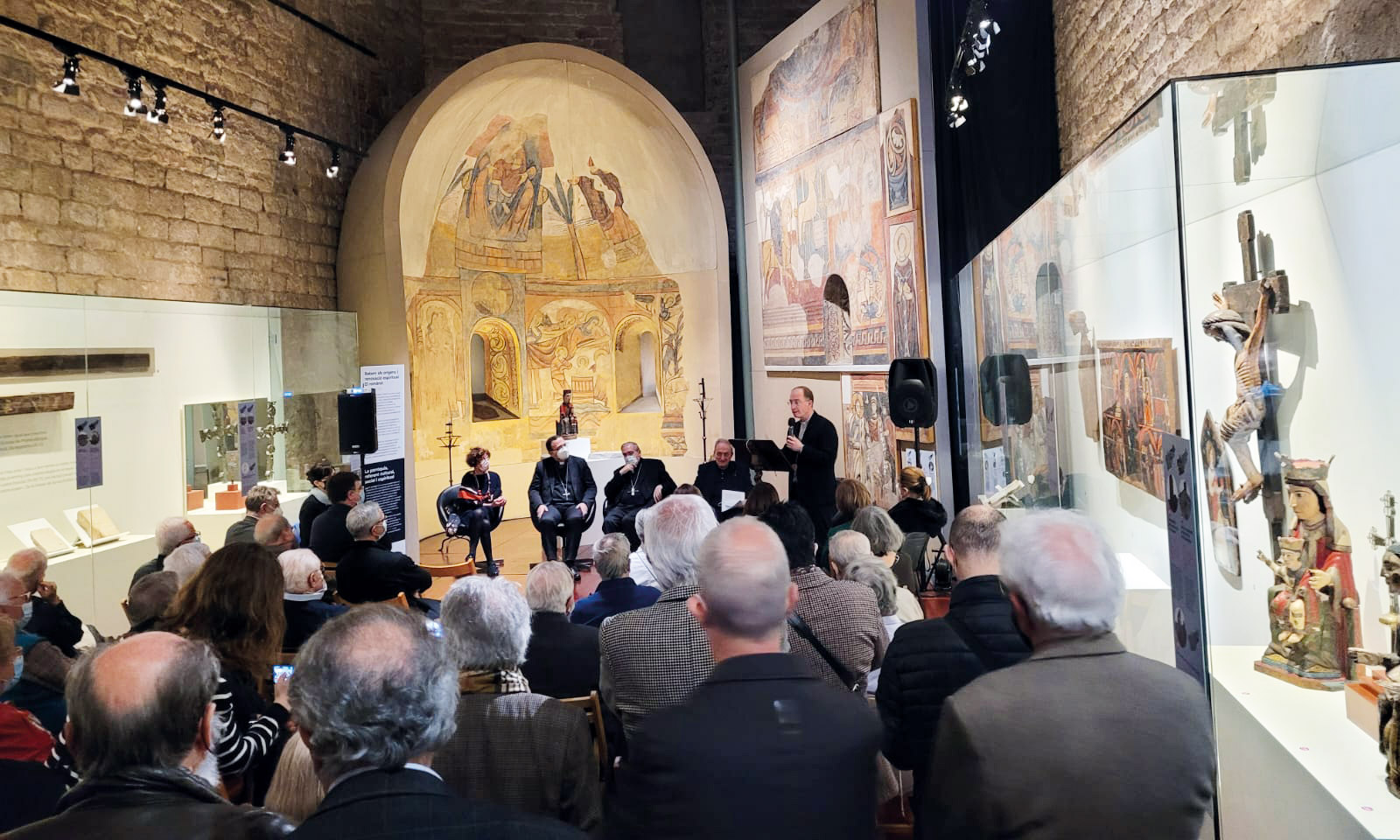 22 de July de 2022
Last April 7th, a very special exhibition for the institution was inaugurated at the Museu Diocesà de Barcelona: "Fides ex auditu" Half a century of Dr. Josep M. Martí i…